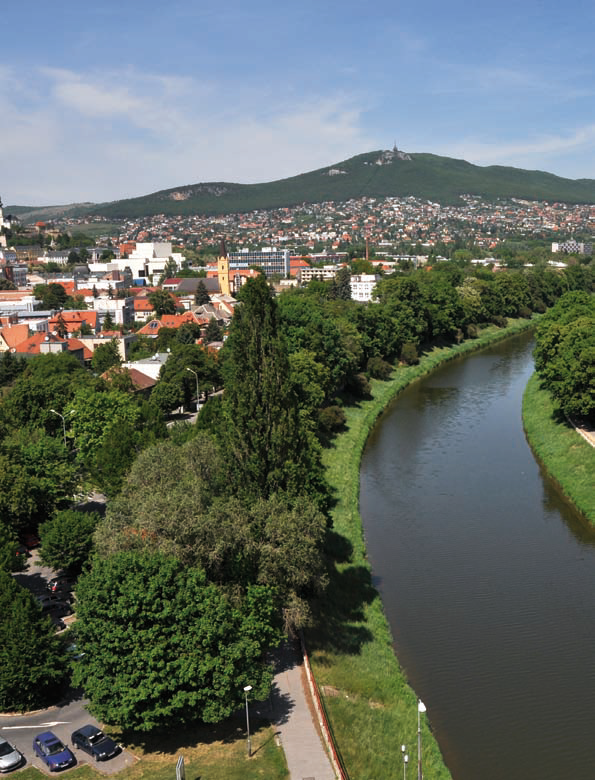 Nitra is one of Slovakia‘s most ancient and most beautiful towns, with almost 83,000 inhabitants. It is located in the south-western part of the country, on the banks of river Nitra, right below Zobor Hill (588 metres) which towers above the town, accompanied by six minor hills to create a unique view.

The favorable location at the crossing of ancient roads as well as the river Nitra and the bottom of Tribeč mountain predestined this place for origination of a settlement. The history of the city is closely related to many important events that influenced the development of Slovakia. Nitra played a key role in the history of the Great Moravian Empire and of the young Hungarian Kingdom. In Nitra and the surrounding region, one can find several unique monuments and sites of European historical importance – the first Christian temple in our territory and the introduction of the first Slavic alphabet. Nitra, the seat of Prince Pribina and King Svätopluk, was and is a symbol of historical values and traditions for the Slovak nation. For these reasons it has been attributed the title "the Mother of Slovak towns".

Two large universities reside in Nitra, museums and several institutions of cultural importance. There are many places worth visiting. The people of Nitra are proud of their Andrej Bagar Theatre, where regular theatre shows and the annual international theater festival " Divadelná Nitra" ( Theatrical Nitra) take place. The extensive exhibition area of Agrokomplex is a place where many interna - tional fairs and exhibitions take place.

Welcome to Nitra, a town of rich history, numerous monuments and cordial people, and have a nice stay here!

Places to visit in Nitra

There are so many interesting places and sights in Nitra that it is difficult to recommend just a few. Don‘t miss a visit to:

Nitra Castle
The main symbol of the town is composed of four separate parts of particular character: St. Emeram’s Cathedral – Basilica Minor, Bishop’s Palace, Household buildings and The Outer Defence Walls. The Cathedral itself is composed of three temples: the Romanesque St. Emeram’s Church, the Lower and the Upper churches.

Pedestrian Zone, Štefánikova trieda
The main shopping street gained its present appearance during the major reconstruction in 1996 when the local sculptors and other artists made their contribution using symbols from Nitra’s Great Moravian past. One such work of art is the Sword just in front of the Ponitrianske Museum, half buried in the earth as a symbol of peace. In the middle of the pedestrian zone you can find the popular Music Clock that strikes every hour with a different tone.

Synagogue, Street Pri Synagóge 2
It was built in 1911 in the Moorish-Byzantine style, designed by architect Leopold Baumhorn, a designer of many monumental synagogues in Hungary. Nowadays it houses the permanent Holocaust exposition called “The destinies of Slovak Jews“ and is also a place of concerts, art exhibitions and other cultural events. An old Jewish cemetery from the 18th century with approx. 5000 gravesites is located near Pražská street in city part Klokočina.

The Nitra City Park, Jesenského Street
The park is now a popular place of relax for both Nitra‘s citizens and visitors. Covering an area of about 20 hectares, it is located in vicinity of the river, the Castle Hill and the sports compound on Jesenského Street. The oldest part, also known as Sihoť, is rich in places attractive for all age groups of visitors, with beer gardens, large playgrounds and the Frog Fountain with the statuette of Ploppy the Water Spirit in the middle. Behind the building of the Nitra Community Centre (officially known as the Park of Culture and Rest - PKO), in the New Park, are ponds Large and Little Hangócka, particularly popular with fishermen.

Zobor Hill
It is a part of protected landscape area named Ponitrie. You can discover it via several hiking trails starting at the Sanatorium for Treatment of Tuberculosis and Respiratory diseases (Kláštorská str. 134). One of them is leading to the Pyramid of Zobor (556 m) passing by the St. Svorad spring and cave, offering a wonderful view of Nitra from the top, or another one going to Drážovský church, a picturesque Romanesque church from 11th century.

The Nitra region is particularly rich in historical chateaus, castles and castle ruins as well as museums, skansens and natural attractions.

Church of St. Michael the Archangel, Dražovce (6 km from Nitra)
The village of Dražovce, mentioned in the Zobor deed of 1111, is an important archaeological site with a Slavonic settlement and burial grounds from the time of the Great Moravian Empire. It is famous mainly for its precious Romanesque church of the St. Michael the Archangel from the 12th century, which belongs to the most beautiful scenes Slovakia can offer.

Chateau Appony (26 km from Nitra) Oponice 271, www.chateauappony.sk
The chateau, nowadays a hotel, was built in the 16th century. It houses a unique historical Apponyi library, founded by the Count Anton Juraj Apponyi around the year 1744 and was famous from London to Petersburg. The most precious prints are from the 16th century, for example a work of Socrates, from 1508. Today it contains 17 000 different books and prints and is accessible to visitors independently from the hotel.

Château Topoľčianky (36 km from Nitra) Parková 1, Topoľčianky, www.zamok-topolcianky.sk
The historical Classicist Manor-House, surrounded by a beautifully landscaped English park, possesses the status of Natural Cultural Monument. Nitra Information System (NISYS) Štefánikova trieda 1, www.nisys.sk Here you can buy maps, guidebooks, brochures or souvenirs and receive useful information about what to do and see in the city and surroundings.

The National Stud Farm of Topoľčianky and Hippology Museum (36 km) Parková 13, Topoľčianky, www.sk.nztopolcianky.sk
Located close to the Château is the National Stud Farm, founded in 1921 for horse-breeding of Arabian, Lipizzaner, Hucul and race horses. In the museum visitors gain an insight into the past of the stud farm and learn about the most important promoters of horse breeding and their sporting success in Slovakia.

Bison Park, Lovce, near Topoľčianky (38 km) Route: Nitra-Topoľčianky - Lovce
The park was founded in 1958 to save the European Buffalo from extinction. Since then over 120 buffalos have been successfully raised and transferred to ZOO`s, wildlife parks and private owners. Visitors can witness the feeding of buffalos at 9 am and 2pm. Arboretum of

Tesárske Mlyňany (37 km) Vieska nad Žitavou, 951 52 Slepčany, www.arboretum.sav.sk
This evergreen park established in 1892 on mild slopes near Vráble, covers nowadays the area of 67 hectares and is a home to 2200 species of bushes and trees, both decorative and common, from all over the world. It is best to visit in May and June.

Rock dwellings of Brhlovce (65 km) Route: Nitra – Levice – Brhlovce, www.slovakheritage.org/Townsvill/brhlovce.htm
In Šurda, a part of the village of Brhlovce, some people still live in cave-like stone dwellings, that as they say were carved into the stone by their ancestors as a protection against Turkish invaders.