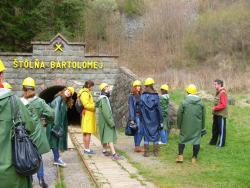 mining towns -Banská Štiavnica and Banská Bystrica. The aim was clear – get to know new places, try new things and have fun!

After challenging bus connections we firstly arrived to Banská Štiavnica. We became miners in Slovak mining museum in nature for about an hour and so could imagine how hard this work was in past. Our nice guide provided us with many interesting facts about mines in Banská Štiavnica and mining in general. He didn’t forget to mention that we should take the last picture in case we won’t get out alive neither that miners had to get naked after they finished work so that the boss was sure they didn’t steal anything and we should get ready for this when we get out as well :)
Don’t worry, we didn’t have to do the same proof – probably because there is nothing left to mine.

We did a little sightseeing after lunch time and visited lovely center of this historic town. We saw the main Holy Trinity Square with its Plague Column, City Hall and the Old Castle with its view.

After the long day we still kept some energy left to Banská Bystrica and the night out. Where else than in Ministry of Fun – the best club in Slovakia? We had a great time and fun till early morning when we moved to Ministry of Sleep.

On Saturday, we discovered the city in a different creative way. We met with ESN UMB members and get involved in city game they created for us :) Changing T-shirts in the city park, dancing in front of the Opera House, giving free hugs and building “ESN” using only yourselves in the main square? And after all, getting bottle of borovička and horalky? Everything’s possible with ESN!
Thank you ESN UMB for your time, patience and creativity ;)

And so our trip ended and we headed back to Nitra. Aim accomplished…

Thank you guys for awesome trip!